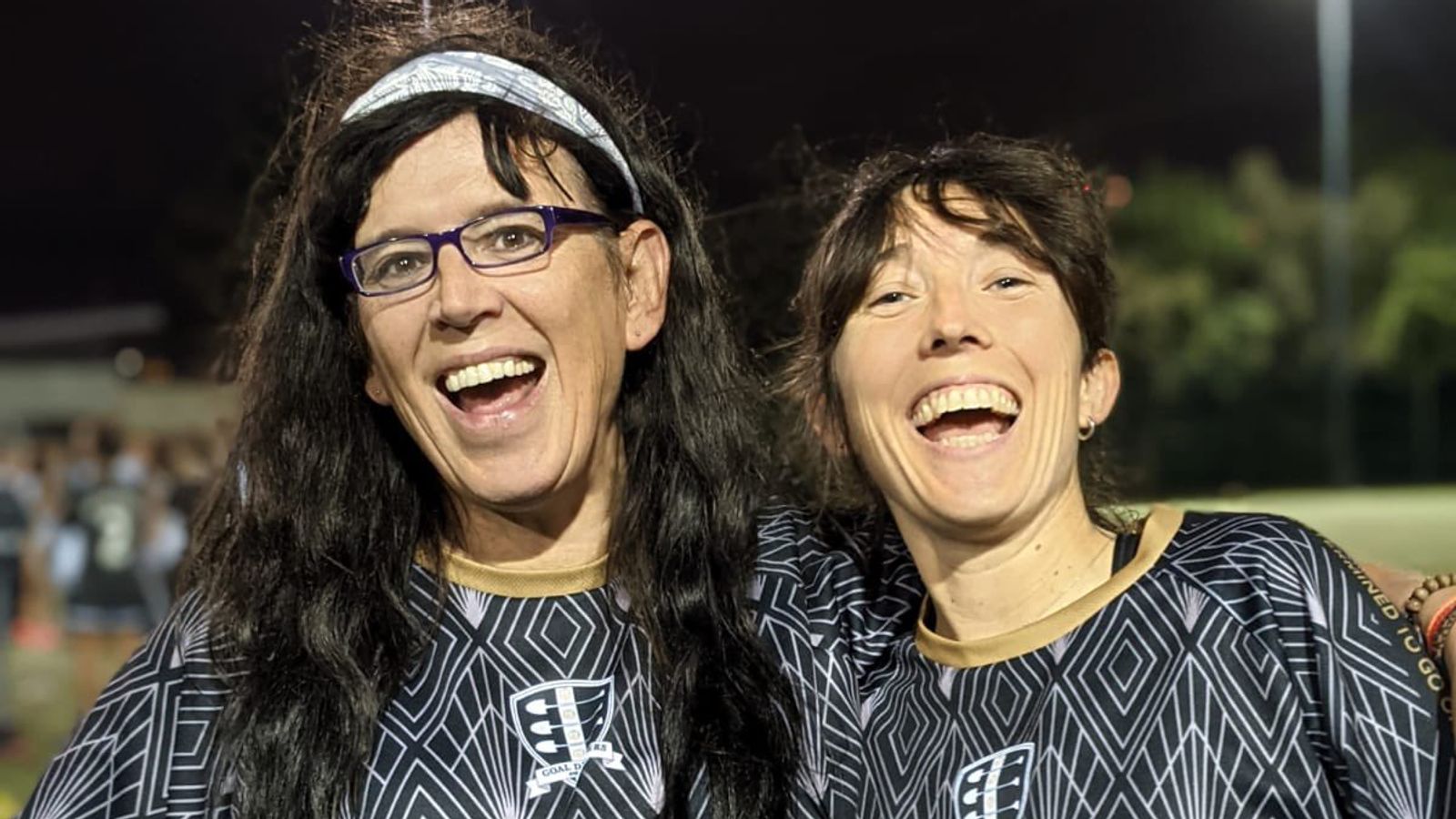 “Even though the club had been really encouraging when I got in touch, I was worried about what the players might think of me, a trans woman,” she says. “But as I nervously walked up to the pitch, the membership secretary Gaia bounded up, introduced me to everyone, and got me started.

“It was so good – very welcoming and accepting, but most of all affirming, to be treated on and off the football pitch as who I am. We all went to the pub afterwards, and I haven’t looked back.”

A few months after that initial session, and having attended several more, Paula shared a picture on social media of herself and Goal Diggers team-mate, Holly Burton, the shot reflecting the happiness and camaraderie that being members of the club has brought to both of their lives.

“I really think that photo of Paula and I says it all,” says Holly. “For me, Goal Diggers is a joyful place to play the game I love. I feel I can be completely myself, kicking a ball around with kind, generous and warm people. Everyone is cheered on here.”

This strong sense of community is reflected in the art-deco style kit the two women can be seen wearing in that photo. It’s part of the 1921 Collection, designed by Anastasia Kutcha, a tribute to the English pioneer players of a century ago who were foiled by the football authorities. The FA brought in a rule that prevented its member clubs from allowing women’s matches to be played on their pitches, and didn’t lift the ban until 1971.

2021 marks 100 years since the FA banned women’s football. Our 1921 Collection shines a light on the history of women’s football, celebrating those who fought to play the sport they loved and the strength of those still fighting.

“It’s beautiful seeing us all wearing this new kit,” adds Holly. “There’s a quote printed across the sleeves from Alice Kell, who was the captain of the famous Dick, Kerr Ladies FC team. Regarding the ban, she said: ‘We play for the love of the game and are determined to go on’. That defiant spirit still rings true now.”

Persistence through adversity and the pursuit of football passions are particularly powerful messages for Paula. She is a supporter and long-term volunteer at Dulwich Hamlet FC, having channelled her energies into a variety of roles with the National League South club for 30 years.

However, in September 2017, having found herself feeling increasingly lethargic and noticing that she was passing blood, Paula went to her local A&E department fearing the worst. After overnight tests, she was diagnosed with stage 3 cancer of the bladder and was quickly rushed into surgery, which was successful.

“I was told the operation was going to be a radical cystoprostatectomy, which means they take out the bladder and the prostate,” she explains.

“They bring you a consent form to sign informing you of the surgery that you’re about to have – and the form they had prepared for me said ‘radical cystectomy for a woman’. Later, I thought that this had to be one of those moments when life tries to tell you something. It was just a clerical error, but I like to think of it as a lucky error.”

Paula had been struggling with gender dysphoria since her early teens. She moved from the West Country to London as a young adult and when at work, she would wear her hair long but otherwise conform to the social expectations of the times. When at home or with friends who were also trans, she would feel more like her true self. “But jumping between two identities becomes very tough,” she says.

Football provided an escape from her inner monologue, and a first trip in the late 1980s to Dulwich Hamlet’s then crumbling Champion Hill home ignited a flame.

“The ground back then had this Gothic-like edifice, and half-lit stands on which you could hardly see because the wiring didn’t work.

“I remember Dulwich had just sacked their manager, Eddie Presland, and out of the gloom came these six figures who dumped a freshly-painted cardboard coffin on the centre circle, symbolising the decline of the club. I thought, I quite like this! There was an eccentric attitude.

“Soon after, the stadium was shut for demolition and Dulwich had to groundshare at Tooting and Mitcham. I was asked if I wanted to help out and when we moved back to a new stadium at Champion Hill, I ran the supporters’ club.”

Duties at Dulwich were also a way of staying preoccupied. Paula came close to coming out as trans in the mid-1990s – “I had a bit of a breakdown” – but despite introductions to new connections who might have helped her to take that next step, it proved too challenging at the time. “I was trapped by internalised transphobia. I wasn’t in denial any more but I couldn’t envisage a way to get out.

“I was thinking of everyone else, not myself.”

What is active allyship? It’s being vocal, standing up for us, putting our side of the story across, and occasionally – when needed – just putting an arm around us.

The prospect of participating within a football environment such as that created in recent years by Goal Diggers would have been mere fantasy for Paula 25 years ago.

Now, however, an increasing number of clubs are not just proudly stating their inclusive values – for all women and non-binary people, of all ages, abilities and backgrounds – but are finding ways to live and breathe them too.

“Before we start every training session and match, we have team captains that make sure everyone shares names and pronouns, never assuming anyone’s gender identity,” says Holly.

“And as Paula found when she joined, we also have a buddy system which pairs a current member with a new member to introduce them to the club and support them to feel welcome at their first session.”

These clubs and their players are thriving. Goal Diggers were recently invited to play at Arsenal’s Emirates Stadium, for a match that was featured in a short film produced by the Premier League and sponsors Budweiser.

The success story of Manchester Laces – only formed at the start of this year – has been brought to wider attention through media opportunities, while Romance FC and Stonewall FC’s women and non-binary team have prospered through the clubs’ involvement in the Adidas Football Collective project.

They are all excellent examples to acknowledge in Trans Awareness Week, held in advance of the annual Transgender Day of Remembrance on November 20. The global initiative encourages members of the public and organisations to highlight issues faced by trans and non-binary people while also celebrating success and achievement within the community.

In a timely development, Tuesday saw the International Olympic Committee release a new framework of guidance to assist sports federations in determining their own inclusion policies regarding gender identity and sex variations, following a lengthy consultation with over 250 athletes and stakeholders.

In a shift away from its previous advice issued in 2015, the IOC has recommended that testosterone levels alone should not be used to determine eligibility and that an evidence-based approach should be employed when considering whether an individual might hold an advantage.

For football in England, the Football Association’s current trans inclusion policy has been operating since 2015; the governing body is now expected to review the new IOC framework as well as advice recently issued by the Sports Council’s Equality Group. The FA confirmed last year that it had been working with Gendered Intelligence to “review the policy as part of good governance”.

Paula followed the existing process in order to receive permission to play; it was thorough but easier than she expected. “Once they had all the information they needed, such as blood test results, it was fairly straightforward. Permission has to be granted every year under the current rules, so as it stands, I’ll need to be assessed again at some point.”

Her recovery from surgery took around six months, during which time she lost a lot of weight. She felt she had been offered a second chance at life. In time, she returned to the office. “My manager spotted that the name on my calendar was now Paula.

“She asked me if that was how I wanted to be known, and I said yes. A few days later, I asked my doctor to refer me to the gender identity clinic. It’s a very long waiting list – and you never know where you are on that list – but it’s all momentum.”

Joining Goal Diggers and subsequently playing for other local teams in south-east London have been major milestones on her journey. In September, she was in goal for the first match played by TRUK United FC, a charity team created by Trans Radio UK which aims to encourage more trans and non-binary people to get active in football, playing alongside allies.

Incidents of discrimination during matches have been relatively rare for Paula, considering the context of current media and social media discourse about trans women in sport. Still, the distress caused by these incidents doesn’t diminish. “Three weeks ago, I was playing in goal and I heard transphobic comments coming from behind me. I look around and it’s a couple of teenage kids.”

These passing spectators deliberately and repeatedly misgendered Paula. They also accused her of cheating. “I tried to shut out the abuse and focus, but other players on both sides heard it too. They said, ‘sorry you had to hear that’. I felt I just have to bite my tongue, and stay strong.”

She is grateful for the allyship shown by her team-mates and those opposition players, and it’s been a similar story down at Dulwich where she has encountered only respect and kindness. It was from her own social media accounts that most Hamlet regulars first learned that she is transgender – the club retweeted her coming out post in January.

“A TV company is making a documentary at Dulwich at the moment,” she says. “I did some filming last week. Peter Crouch, who’s now one of our directors, wanders in and shouts ‘hi Paula’! It’s all just so friendly there.

“The assistant manager Junior Kadi asks me to talk about my history with the club – such as how I used to write these florid match reports! And I get to explain why Dulwich has been so important to me. Everything is so much easier now, when it really wasn’t before.”

Coming out in later life is daunting in a different way to that faced by younger generations – more time has passed in which to internalise fears and anxieties, and there are often more threads of identity and relationships to untangle.

Often, finding a new group of people who will affirm you as your authentic self is the solution. Goal Diggers FC has provided that for Paula, and helped build her confidence at her other football home – the Hamlet. Growing awareness about the benefits of solidarity in women’s sport is an ongoing ambition.

She doesn’t dwell on regrets. “It would be easy to look back on my life and say how I wish I’d done this or that.

“But I want to look forward and say, ‘let’s do more’.” Alice Kell would admire her determination.

Sky Sports is a member of TeamPride which supports Stonewall’s Rainbow Laces campaign, returning for its annual activation from November 25 to December 12. Your story of being LGBTQ+ or an ally could help to make sport everyone’s game – please contact us here to discuss further.