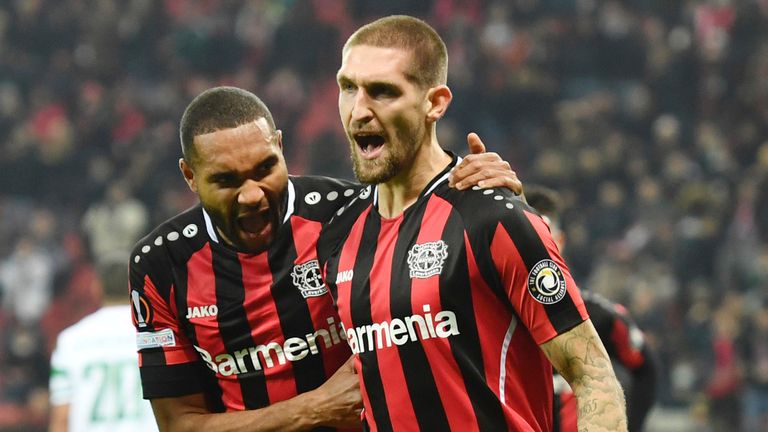 Joy turned to despair for Celtic as two late goals earned Bayer Leverkusen a 3-2 win in Germany and condemned the visitors to a group-stage exit in the Europa League.

With 10 minutes remaining, Celtic were on course for a stunning shock victory thanks to a Josip Juranovic penalty and Jota’s classy finish either side of half-time, until disaster struck to drop them into the Europa Conference League.

First Robert Andrich fired in his second of the night, having earlier opened the scoring from a corner, to bring them level from Amine Adli’s lay-off before a fine 20-yard volley from Moussa Diaby turned the game on its head and brought Celtic’s hopes of progression crashing down, while sealing top spot in the group for the hosts.

The Bhoys will still qualify for the Conference League knockout stages as they are guaranteed to finish above bottom side Ferencvaros, but they will now host Betis in a fortnight knowing their Europa League campaign is destined to finish in the group stages whatever happens.

The Germans signalled their intent in the 10th minute when Andrich headed over from a Florian Wirtz corner.

Celtic were looking reasonably comfortable in the early stages, although Cameron Carter-Vickers had to make a vital clearance from inside his own six-yard box when former Hoops right-back Jeremie Frimpong darted into the box and drilled a dangerous low ball across the face of goal in the 12th minute.

The visitors failed to heed the warning from Leverkusen’s earlier corner, and they fell behind in the 16th minute when Andrich got in front of Stephen Welsh to head in another Wirtz delivery.

Celtic had a rare foray forward in the 35th minute which resulted in David Turnbull threading a through ball in behind for Kyogo Furuhashi but the offside flag was raised as the Japanese attacker burst into the box and fired a low angled shot just behind the far post.

Having been pegged back for long periods of the match, the visitors got themselves level in the 39th minute with a penalty awarded following a VAR review after Leverkusen goalkeeper Lukas Hradecky clattered recklessly into Kyogo while trying to defend a cross into the box from Jota.

Hradecky was booked and Juranovic produced an outrageously nonchalant finish as he chipped a Panenka-style spot-kick in off the underside of the crossbar.

Juranovic was fortunate to get away with a lapse in the 44th minute when he gave the ball away cheaply just outside his area allowing Moussa Diaby to fire a powerful angled half-volley off the junction of post and bar before Wirtz sent the rebound crashing against the opposite post.

Celtic had another major let-off eight minutes after the break when Joe Hart made a brilliant double save to deny Diaby and then Amine Adli.

Remarkably, Celtic took the lead in the 56th minute when Jota drilled in a clinical low angled shot from just inside the box after being teed up by Kyogo following some brilliant play by Forrest and Nir Bitton.

Hart made a couple of saves to deny Adli as the Scots started to believe they might be closing in on their first victory in Germany.

But Andrich dashed their hopes in the 82nd minute when he drilled a low shot through the legs of Hart from 12 yards out after being set up by substitute Nadiem Amiri.

The hosts claimed victory in the 87th minute when Diaby volleyed home after being picked out by a chipped pass from Wirtz.

Celtic are at home to Aberdeen in the Scottish Premiership on Sunday; kick-off at 3pm.