Gerwyn Price admitted nerves got the better of him during his hard-fought win over Bradley Brooks.

Gerwyn Price admitted nerves got the better of him during his hard-fought win over Bradley Brooks.

Gerwyn Price had to dig deep to avoid a monumental shock at the Grand Slam of Darts before sealing victory over Bradley Brooks to set up a quarter-final showdown with fellow Welshman Jonny Clayton.

Twenty-four hours on from Fallon Sherrock’s heroics, the knockout stages got under way with the experienced names taking on the next generation of stars who had impressed so far this week at the Aldersley Leisure Village

Price had to repel a brilliant comeback from world youth champion Brooks to finally get across the finishing line, winning four of the last five legs for a hard-fought, 10-8 victory over ‘Bam Bam’ who has underlined his growing reputation with a stellar week.

He will now face Clayton after ‘The Ferret’ maintained his perfect record in the tournament with a dominant 10-2 win over youngster Nathan Rafferty.

Price and Clayton win through to another TV showdown

Price and Clayton have dominated the major events since they teamed up to win the World Cup for Wales, and they will now face off with a place in the last four on the line – just a few weeks on from Clayton’s triumph in the World Grand Prix final.

Price and Brooks duked it out in the game of the night, a contest that pitched the reigning world champion against the reigning world youth champion and the younger man rose to the task. ‘The Iceman’ took out 72 to break the throw of his 21-year-old opponent and added a 167 finish to consolidate the early lead when Brooks was well placed to hit straight back. 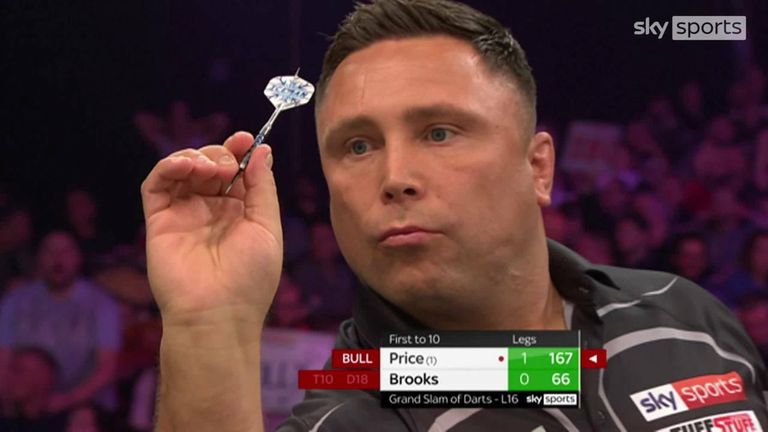 Price started his match against Brooks in fine form, hitting a 167 finish

Price started his match against Brooks in fine form, hitting a 167 finish

When Price missed a dart at tops for another big finish and a 3-0 lead, Brooks swooped to get a leg on the board but Bam Bam was within touching distance despite a 13-point disparity in the averages.

Brooks missed two at double top to level the match and Price pounced to open up a 5-2 lead before Brooks, roared on by the crowd in the biggest match of his career, began to match The Iceman.

A stunning burst from the Blackburn youngster turned a 6-4 deficit into a 7-6 advantage – a roof-raising 127 the highlight.

Having lost five of the previous six legs, Price hit a sensational 120 – with a trademark accompanying roar – to level the match and when Brooks missed three at double 14 for the lead, Price was back in front. With a tense finish in store it was the experience of Price which prevailed – despite the drama of the 17th leg that saw the pair miss 10 darts between them for the leg.

Every time Price has gone beyond the last 16 he has won this tournament, memorably and controversially against Gary Anderson in 2018 and then spectacularly against Peter Wright in 2019 – on both occasions it was played at the Aldersley Leisure Village.

Back in the same venue, and now the world No 1 and world champion after his success at Alexandra Palace in January, Price will face a team-mate who is becoming his nemesis after Clayton matched his best-ever showing at the Grand Slam with victory over Rafferty. Jonny Clayton is off to a flying start in his match with Nathan Rafferty, winning the opening leg with a 148 checkout

Jonny Clayton is off to a flying start in his match with Nathan Rafferty, winning the opening leg with a 148 checkout

After the pair traded three-figure finishes in the opening legs of the match, The Ferret was too good for the 21-year-old, opening up a 3-1 lead when Rafferty missed four to level the match. 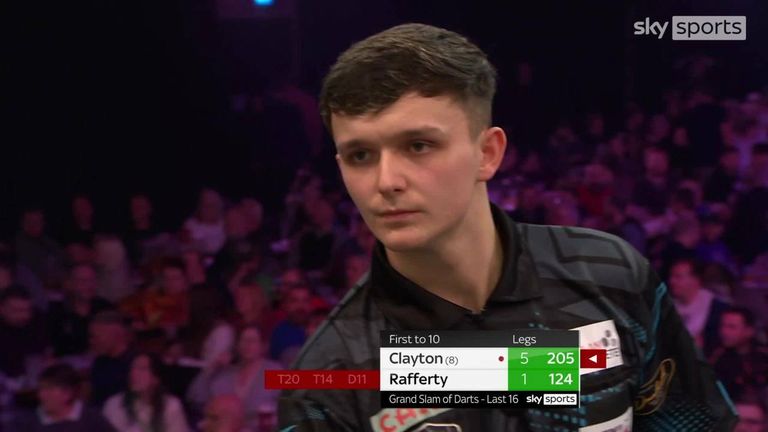 Clayton never looked back as 13-dart legs either side of the interval took him into a 5-1 advantage before a brilliant 124 finish gave Rafferty his second leg of the match in 12 darts.

Finishing was proving to be the difference as Clayton took out almost every chance that came his way for an 8-2 advantage before a 10-dart leg took him to within one and a clinical 121 checkout sealed the victory and a showdown with Price for the third time at a TV tournament in the last few months. 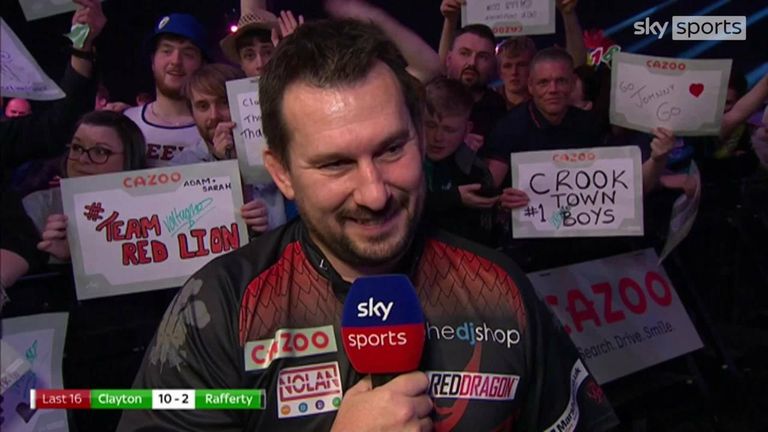 Grand Slam of Darts 2021: Thursday’s Second Round Order of Play

Rematch in store for in-form Wade and Cross

Rob Cross and James Wade set up a blockbuster quarter-final of their own – the multiple major winners having little trouble in accounting for their lesser-experienced opponents.

Cross – the 2018 world champion who picked up the European Championship title for a second time in three years just a few weeks ago – produced a spectacular seven-leg burst that put an end to the run of qualifier Ryan Joyce in the opening match of the night.

Cross, beaten at the second-round stage in each of the last three years, trailed 3-2 at the end of the first session but he won all five legs of the second session – with an average of 112 – to sweep into a 7-3 lead.

Having taken out 121, ‘Voltage’ then added a classy 116 to stand within two of the finishing line. Joyce grabbed a fourth leg, but Cross returned to seal a place in the quarter-finals for the first time since his debut in 2017 when he was beaten in a thriller by Michael van Gerwen. Wade was even quicker in dismantling the last remaining Rodriguez brother. Rowby-John had won through a tough group to take his place in the last 16, while brother Rusty-Jake was eliminated in the group stage.

‘The Machine’, beaten in three finals at the Grand Slam, including last year against Jose De Sousa, went two legs better than Cross’ seven-leg burst – reeling off nine in succession after the young Austrian had taken the opener.

A clinical 70 gave Wade the first break of throw and he followed up with a nerveless 120 finish – maintaining his perfect record on the outer ring, all via double top. 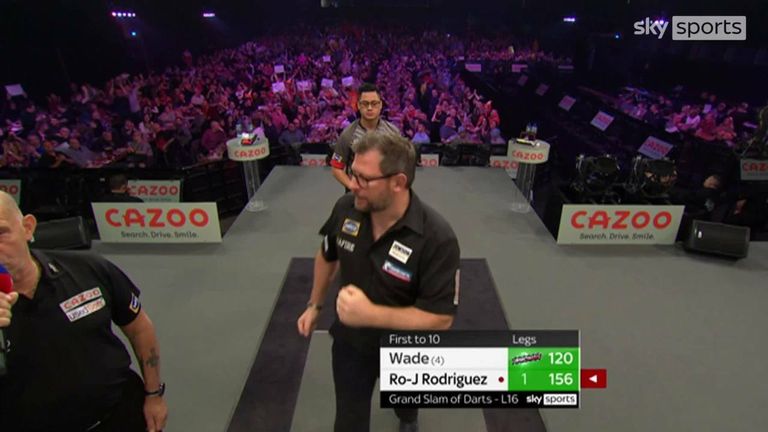 Having moved 4-1 in front before the break, a limping Wade returned to move five clear and he added the best leg of the match, finishing in 13 darts and predictably on double top, before a ninth leg in succession followed to leave him within one of the finishing line.

Rodriguez ended Wade’s run when he took out a brilliant – and unexpected – 170 finish to get a second leg on the board, but it merely delayed the inevitable as Wade wrapped up a dominant victory when he pinned his trademark double 10.

Cross and Wade met in the group stage, when Wade needed a 5-2 win to progress and obliged with a 5-3 triumph which saw him top the group, and they will duke it out again on Friday night with a semi-final spot up for grabs in a tournament neither man has won, but they will now have their eyes on adding it to their glittering CVs.

Don’t miss a dart from the Grand Slam of Darts which continues on all week from Wolverhampton’s Aldersley Leisure Village – join us on Thursday night from 7pm on Sky Sports Arena. Check out daily Darts news on skysports.com/darts, our app for mobile devices and our Twitter account @skysportsdarts

For over 8 years, Dave has been working in mainstream media and sports betting.
Previous Stockport 5 – 3 Bolton
Next Arsenal Women 3 – 0 HB Køge Women