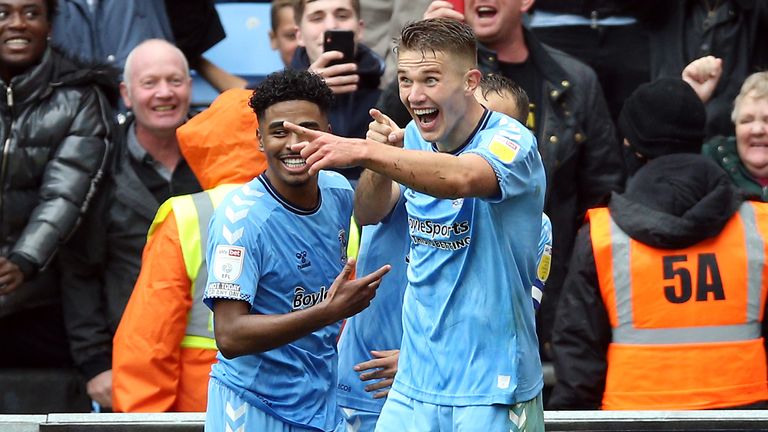 Who is David Prutton tipping for victory in the Sky Bet Championship in the midweek round of matches? Find out here…

It speaks volumes about how far Blackpool have come since the start of the season that questions are being asked now when they go a few games without a win.

West Brom lost again at the weekend and that gap to the top two is growing. Questions are being asked of Valerien Ismael’s style and he needs to address those problems quickly. This is a tough trip for the Baggies. And one I don’t see them coming away with anything from.

Coventry welcome their old landlords back to their home city, in what will be a nice reminder of how far they have come this season – particularly when they look at how good their form has been at the CBS Arena so far.

Birmingham have suffered back-to-back defeats either side of the international break to slightly halt their momentum again. It could well be a third defeat in a row here.

Reading got a positive draw against Nottingham Forest on Saturday at the end of what had been a difficult week following their points deduction. They will want to keep up that level of optimism, because they need to keep going if they are to avoid slipping further towards the bottom three.

I’ve spoken a lot about Sheffield United’s inconsistency so far. But it is more than that now. They have not been good enough and at some point it needs to turn, because with the squad and manager they have, they should be higher up the table. Score draw here for me.

Just as Bristol City got that first win at home a few weeks ago, their away form has completely escaped them at the same time. One win and five defeats in six games is a real slump in form.

Stoke, meanwhile, are back on the march after three wins on the spin. They are going to have to keep going if they want to put any pressure on the automatics, but a top-six spot is more than within their grasp this season. This is the type of game they need to win if they want to achieve those ambitions.

Quite frankly, it is hard to think of any reason right now to doubt Fulham’s chances of going on to win promotion. They can’t stop scoring, hardly ever concede, keep on winning and are top of the table. They could be on track for a record-breaking campaign.

Derby overcame their latest points deduction to record a brilliant win against Bournemouth on Sunday, doing Fulham a massive favour in the process. They are a squad packed with resilience under Wayne Rooney, but it is hard to see any side coming away from Craven Cottage with anything right now.

Millwall are going about their business very quietly this season, but are right up there amongst the sides who could well sneak into the top six if things go their way between now and May.

Bournemouth slipped up on Sunday. The gap between themselves and the chasing pack for their top-two spot is still big, but it can close quickly if they keep stumbling. And I feel like this could be another stumbling block.

Prutton’s other predictions (All Wednesday 7.45pm unless stated)

For over 8 years, Dave has been working in mainstream media and sports betting.
Previous Terence Crawford says he’s on a ‘different path’ to Josh Taylor despite talk of a future world title showdown | Boxing News
Next Coventry: How Mark Robins’ Sky Blues became underdogs in the Championship promotion race | Football News