There’s a war going on between fans of Major League Baseball, and it’s pitted traditionalist old timers against followers of the new era of advanced baseball statistics so intriguingly called sabermetrics.

Wins Above Replacement, commonly known as WAR, is the latest stat at the heart of this debate.

So, sharpen up your sabers – here’s how to calculate Wins Above Replacement and use this advanced statistic to wage WAR on your favorite online sportsbooks.

WAR is an advanced baseball player statistic that attempts to capture the totality of each player’s contributions to the team.

Each player’s WAR value estimates the number of wins their efforts add to the team throughout the season vs a replacement player.

To think of it another way, WAR attempts to combine several individual statistics to provide a single number that answers the crucial question: ‘if this player were injured tomorrow and replaced with a standard AAA player brought up from the farm, how much impact would this have on the team’s ability to win?’

WAR is one of the only statistics that attempts to estimate a player’s outcomes across more than one specific skill.  Of course, it’s very tricky to calculate a single number that can be used to compare players across positions, styles of play, and two leagues with significantly different rules.

The degree to which you believe this type of aggregation is possible will likely determine how you feel about using WAR to inform your baseball betting strategy.

How Is WAR Calculated?

Because it attempts to shed light on all elements of a player’s performance, there are a head-spinning number of inputs to consider when calculating WAR.

To further complicate the matter, there’s also minor disagreement about the formula itself. Both Baseball-Reference and Fan Graphs have their own respective versions, which tend to deliver very similar but rarely identical numbers.

Even the creators acknowledge the inherent difficulty of the task at hand:

There is no one way to determine WAR. There are hundreds of steps to make this calculation, and dozens of places where reasonable people can disagree on the best way to implement a particular part of the framework. – Baseball-Reference.com

And while the individual steps vary between the major statisticians, there is one crucial component of the equation they both agree on…

How Good Is a ‘Replacement’ Player?

Defining the skill level of a standard ‘replacement’ player is obviously necessary to calculate WAR. Luckily, the two major statistical outlets who formulate and track WAR agreed to standardize this part of the calculation in 2013.

The agreed-upon replacement level is equivalent to a .294 winning percentage or 47.7 wins over a full season. With both statistical powerhouses reaching an armistice on this element of WAR, bettors now see less variation between the Wins Above Replacement values at each site.

The process for calculating WAR also depends on player position. Weighted inputs are slightly different for all nine positions, but the high-level formula used to calculate WAR for all position players is the same, while a separate formula is used for pitchers.

Finding the individual inputs for each of these formulas requires hundreds of smaller calculations. While you can read the detailed description, there’s really no reason to calculate WAR values yourself when betting on baseball.

Simply compare the two stats from Baseball-Reference and Fan Graphs for two perspectives on the number as calculated by the experts.

Because they attempt to capture such a wide range of player contributions, WAR ratings are most helpful when viewed as general indicators. The following ranges are typically used to categorize a player’s value: 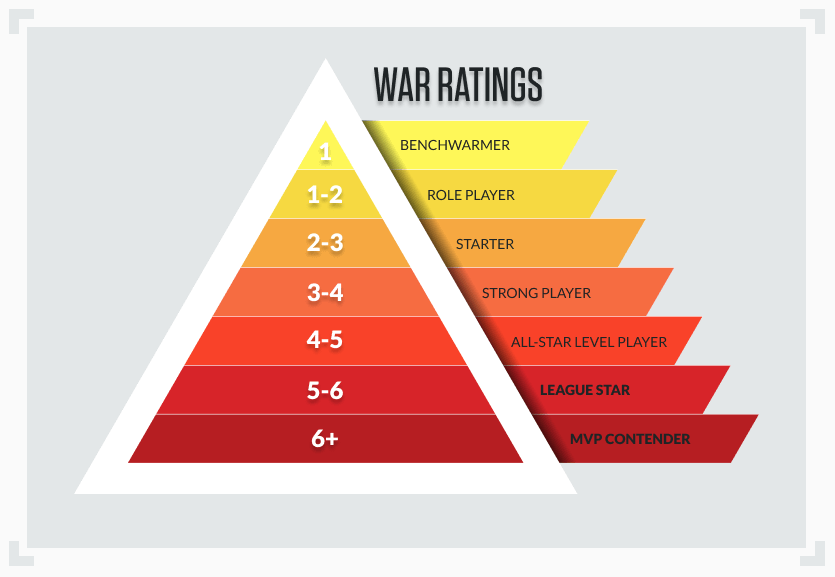 These are just general guidelines. Virtually all relief pitchers will find themselves with a WAR rating in the range of 1 – 2, even though a few of them are star closers who clinch many a crucial game for their teammates.

Looking at the distribution of the top MLB players provides a bit more context to these numbers:

*values based on bWAR ratings as reported by ESPN

Now that we’ve built a solid foundation of understanding around this complex statistic, let’s take a specific look at how it can help you make more money betting on baseball online.

Using WAR to Bet on Baseball

The most important thing to remember about WAR is that it has always been intended as an estimation.

It relies on imperfect statistical inputs that are somewhat objective, so the formulas will never be an exact science.

When preparing your baseball bets or any other sports wager, always remember to rely on multiple statistics and be careful to place them in the right context.

When You Should Use WAR to Bet on Baseball

Betting MVP Futures – As an indicator of each player’s overall performance and value to their team, it follows that the stat would be helpful when handicapping the AL & NL MVP races.

In fact, no player with a season-long WAR ranking outside the top 10 has been named MVP of either league in the past seven seasons. Of the fourteen MVPs over this period, eleven of them finished the season with a WAR ranking within the top 5.

As such, it makes sense to limit your MVP picks to players within the top 5 WAR rankings.

You can track the odds for NL MVP and AL MVP here at Sports Betting Dime. Look for value by cross-referencing each player’s odds with their WAR ranking.

Betting Season Win Totals – WAR values can also be used to handicap the likely performance of entire teams. As Fan Graphs has pointed out, there is a strong correlation between a team’s projected WAR total and their actual record.

This fact suggests that bettors can find the sum of the projected WAR values for each player on any team as a predictor of the team’s likely season win total.

Evaluating the Impact of Trades and Injuries – WAR is perhaps the best metric to evaluate the impact of a lineup change that results from a trade or injury.

Because WAR captures the totality of a player’s likely contributions to the team, it’s a viable, even advisable stat to use for the apples-to-apples comparison you’ll need to do in the case of a last-minute lineup change.

When You Should Not Use WAR to Bet on Baseball

To put it simply, WAR is not a good tiebreaker. Because it is an extremely general statistic, we would caution you not to use it when comparing two players that are closely matched.

WAR is a big-picture statistic – it should only be used to answer general questions about the relative abilities of MLB teams and players.

It’s also advisable to consider more focused stats when specific skills (such as pitching against an All-Star left-handed designated hitter) are more relevant to the particular game in question.

Just remember: WAR is a big-picture statistic. As such, it should only be used to answer big picture questions about the relative abilities of MLB teams and players.

Sports Betting Dime has an entire series of baseball-specific betting guides in our how to bet on sports section. From the basics to more advanced strategic considerations, our tips will help you bet smarter and win more often.

Always remember to wager responsibly, and enjoy the action this MLB season.